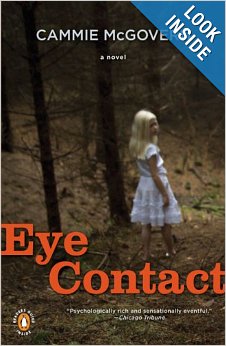 Two children disappear into the woods behind Woodside Elementary School. Hours later one them, nine-year-old Adam, in found alive, the sole witness to his playmate’s murder. But Adam is autistic and can say nothing about what he saw. Only his mother, Cara, has the power to penetrate his silence. When another child goes missing and Cara’s unsettling past emerges from the shadows, she has to ask herself whether her efforts to protect her son have exposed him to unimagined danger. Eye Contact is a thriller of hypnotic suspense and a powerful story of the bond between a mother and a very special child.

“Deeply moving, actually, gripping…Cammie McGovern bring to the page an empathetic understanding of the lock that autism places on a mother’s child.” New York Daily News

“So detailed and illuminating are McGovern’s descriptions of Adam that she offers, in essence, a primer on the nature of autism. Eye Contact is compelling by virtue of its spiky and in-transition characters. Psychologically rich and sensationally eventful.” Chicago Tribune 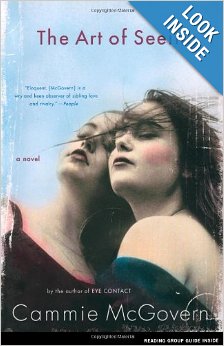 The Art of Seeing

As a child, the flamboyant, brooding and beautiful Rozzie was always the star of her family—especially in her younger sister Jemma’s eyes. So when Rozzie takes up acting and, as a teenager, wins a part in a major motion a picture, the life changes irrevocably for both sisters. Rozzie is catapulted into the chaotic adult world of celebrity while Jemma travels to movie sets and relishes her sister’s fame—never seeing the strain that the spotlight puts on Rozzie. Soon Jemma develops her own artistic ambitions as a photographer, and Rozzie is forced to reveal the secret she has kept from her family for years…

A moving story about family, celebrity, envy, and ultimately love.

“McGovern explores the deep shadows thrown by sisterly rivalry. She skillfully reflects the spotlight of fame back on itself.” Los Angeles Times

“A well-told tale of love and jealousy: good characters and a strong narrative voice.” Kirkus Reviews 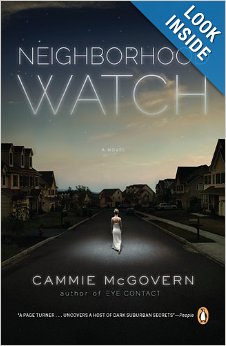 Twelve years ago, librarian Betsy Treading was convicted of murdering her neighbor, the bohemian loner, Linda Sue. After DNA testing finally exonerates Betsy, she returns to her suburban community determined to salvage her life and find the true killer. As she begins to pick apart the web of secrets, lies and love affairs uncovered in the wake of her trial, Betsy suspects that her tight-lipped neighbors may know something that she has denied even to herself…

In Neighborhood Watch, Cammie McGovern captures the nail-biting electricity of the best literary thrillers and zeroes in on the subterranean tension abuzz in a town whose dark secrets threaten to obliterate the glossy façade of a perfect life. Intricately woven, psychologically astute, and filled with complex and surprising characters.

“In this superb suburban thriller, McGovern seductively unreels Betsy’s pursuit of the truth one shocking spool at a time. Fans of literary suspense fiction will be well-rewarded.” Publishers Weekly starred review

“McGovern’s engrossing tale of mistrust and deception is made all the more sinister by the false security portrayed behind its conventional white-picket fence façade.” Booklist

What a powerful force she was and what a life-changing movement she began... twitter.com/SpecialOlympic…

Our movement was founded through the will of 1 woman who made it her mission to change the 🌎 for our athletes.

As we kick-off #WomensHistoryMonth, we celebrate Eunice Kennedy Shriver & how she challenged society to re-imagine the role of people with intellectual disabilities! pic.twitter.com/sXXahPBQRM

Out in paperback TODAY!! Just what you need to wrap up your pandemic reading list maybe? amazon.com/Just-Breathe-C…

Thank you Rachel! You've made my day! twitter.com/RMChickonwheel…